One day, about two decades ago, a plastic-wrapped stack of simple recipe cards arrived the mail. I don't know who sent them. Probably some brand hoping to sell its particular brand of pasta or cheese. I went through them, pulling out ones that I thought my mom might want to make for dinner.

This simple, veggie-packed angel hair pasta with chicken is the only one that we all liked — So much so that when she put together a binder of family recipes for me to bring to college, this recipe made the cut... twice. (It's in the chicken section and in the pasta section — just in case!)

Like most college students, I didn't cook often. But when I knew I was about to be pulling a weekend of all-nighters and needed to be able to quickly grab leftovers from the fridge, this is one of the recipes I'd turn to. Divided up into five or six tupperware, it was the perfect grab-n-go meal.

Given my fairly limited cooking skills back then, I liked (and still like!) the ease and steady pacing of the recipe. You'll never feel rushed while making it. And I liked that I could skip or add veggies based on what I had in the fridge, and even use frozen veggies if I wanted.

The flavors come from the veggies themselves, as well as from the addition of dried basil and a quarter cup of parmesan cheese which thickens the stock to create a light, creamy sauce that coats the noodles.

Angel hair might be a divisive pasta shape, but I like the way it wraps and tangles around the veggies, making them easy to scoop, slurp, and twist on to your fork.

It cooks quickly (about 4-5 minutes), which is the exact amount of time you need to let the chicken and veggie mixture simmer once you add the chicken back into the pan, which means you never end up in that awkward bit of kitchen downtime waiting for pasta to finish cooking while hoping the stuff in your skillet won't burn or overcook.

It might not be a true one-skillet dinner, but I do love a dinner that ends up all back in one pan. No need to strain the angel hair over the sink, just use one of those pasta straining spoons (TIL they're called pasta forks!) or a pair of tongs to transfer the al dente pasta straight from the boiling water into the skillet with the chicken and veggies.

how to make angel hair pasta with chicken

Prep: Cut two chicken breasts into roughly 1" cubes, then season with salt and pepper. Sprinkle ½ teaspoon salt and ¼ teaspoon pepper over the cubed chicken, and toss with your hands to evenly distribute. Set aside while you prep the veggies so the salt can begin infusing the meat with flavor before it hits the pan.

To prep the broccoli, cut one crown of broccoli down into small pieces. (Big florets tend to have trouble twisting up with the angel hair.) Cut the crown into florets, then cut each floret smaller and smaller by cutting the stem close to the blossoms so they separate. You should have very bite-size pieces when you're done. (Save the stems in a bag in your freezer to make broccoli soup!)

If using a whole carrot, peel it and slice it thinly. If using shredded carrots, measure out ½ cup (a large handful is fine) along with a ½ cup of frozen peas. Mince or grate 2 cloves of garlic.

Cook: Fill a pot with salted water and bring to a boil so it's ready when it's time to cook the pasta. Meanwhile, heat 1 tablespoon oil in a large skillet. Add the chicken pieces to the skillet in an even layer. They might stick to the bottom of the skillet at first, but that's okay — they'll release when they're ready. Turn the chicken pieces to cook all the sides. When just cooked through, remove the chicken from the pan to a plate lined with a paper towel.

The chicken will continue cooking as it rests, and will be added back to the skillet later, so if you overcook the chicken pieces here... they'll be really overcooked by time you're done. You can always remove the smaller pieces early and let any bigger pieces keep cooking an extra minute or so if you need to.

When the chicken has been cooked and set aside, add an additional 1 tablespoon of oil to the same pan and cook the carrots on their own for a few minutes. They need longer than the other veggies to become tender, so you're basically just giving them a head start. Then, add the garlic, broccoli, peas, and basil and stir.

Drop your pasta into the now boiling salted water. Then, while the pasta is cooking, pour the chicken (or vegetable) stock into the skillet with the veggies and use a spatula to scrape up any browned bits on the bottom of the pan.

Finish: When the pasta is done, transfer it directly from the pot of water to the skillet.

Don't worry about draining the noodles or getting pasta water in the skillet — the starchy water will combine with the stock and parmesan in the skillet to coat the noodles and turn into a sauce. Use a pair of tongs to twist and twirl the pasta and mix it up with all the veggies and chicken. Serve in bowls topped with additional parmesan, if desired.

Tried this recipe?Leave a comment and let us how it was!
« lettuce and walnut salad with mustard-dill vinaigrette
peppermint patty brownie cookies » 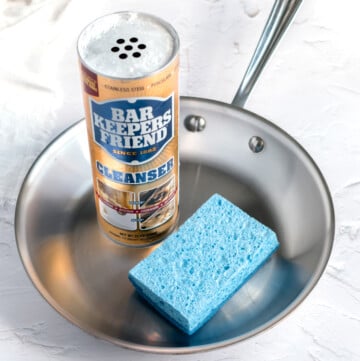 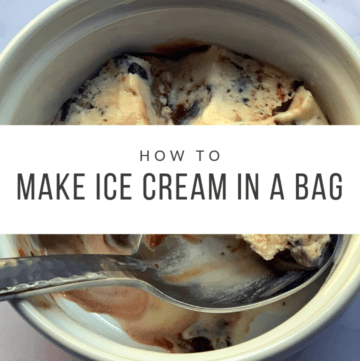