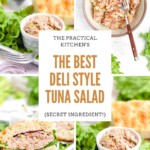 I spent years hunting for the elusive ingredient in the tuna salad my grandma used to pick up at her local deli only to find it was right in front of me the whole time.

This perfect pale pink, creamy-yet-crunchy deli tuna salad comes together in minutes and uses ingredients you probably already have on hand. It's delicious on rice cakes, salads, in pita pockets, on focaccia or crackers, in lettuce cups, or served as tuna on toast a la George Costanza.

Tuna salad is a great simple lunch staple to have on hand. It uses lots of budget friendly, shelf-stable ingredients. You can make it in bulk and it will stay good in the fridge for several days (and when you see what the secret ingredient in this recipe is, you'll understand why "staying good for a few days" is absolutely no problem here).

In fact, this deli tuna salad will actually get better in the fridge over time!

⭐ Why I Love This Deli Tuna Salad

But I'm a tuna salad connoisseur. My family used to tease me on vacation because no matter where we went, I ordered tuna sandwiches. At one point, I even made an illustrated chart ranking all the tuna salads I had ordered on our trip. But I digress.

The best tuna salad I've ever had, was the one my grandma picked up at the deli counter of the Foodland near her house in Pittsburgh. It was a light, pale pink color, heavy on the mayo — almost creamy — but without the mayo flavor coming on too strong. It had crunchy bits of carrot and celery throughout, as well as flecks of white and yellow, hard boiled eggs chopped right into the mix.

Over the years, I've tried to replicate that tuna salad — somewhere, my mom has an index card on which I scrawled "REBECCA'S TUNA SALAD" (no credit to Foodland) my very first recorded attempt at making it myself over a decade ago.

But there was always something missing. I'd add paprika, or oregano, maybe toss in some capers or finely dice the onion instead of doing a rough chop. Maybe more salt and less pepper? No, more pepper and less salt? The end result was always kind of close — but that x-factor, that thing that brought it all together, remained a mystery.

A couple years or so ago, completely by accident, I finally figured it out. You see, usually, when I made tuna salad I ate it right away. On this magical day, however, I made more than I could eat at once. And when I went back to it the next day, that elusive flavor I'd been looking for... was there.

💭 The Secret to Deli Tuna Salad

*drumroll* The secret ingredient in a deli-style tuna salad is time.

If you knew my grandma at all, this is particularly hilarious, because she was notorious for keeping things in her fridge long past the recommended best "by date." But the tuna she got at the deli already had that classic "deli" tuna salad taste when she picked it up. And a deli style tuna salad doesn't need to "go bad" to be good — just 12-24 hours overnight in the fridge before eating will do.

So why does deli tuna salad taste better? When you let tuna salad sit overnight, the way it does at a deli, the flavors have time to meld together. The mayo and seasonings absorb into those individual components — the celery, in particular — creating a more cohesive tuna salad experience.

And this is true whether you're trying to make New York style deli tuna salad, or trying to replicate a the tuna salad from a famous restaurant or deli like Katz's or McAlister's. No matter what tuna salad recipe you follow, if you eat it immediately, you're basically tasting the individual components, coated in some mayo. They haven't had time to meld.

The best part of this discovery, by the way, is that the perfect deli tuna salad is less about the specific ingredients and and more about the preparation. If you don't like egg, don't put egg in it. If you don't want paprika or oregano or you want less mayo or more mayo, you can adjust to suit your preferences.

No matter how you combine the ingredients — letting it sit in the fridge overnight before eating will yield the same cohesive result.

In addition to time, pretty much everything that goes into this deli tuna salad recipe you probably already have in your fridge or pantry, and if you don't — you can simply skip them (unless you don't have tuna and mayo, they're kind of non-negotiable here).

You can get really creative with your tuna salad ingredients, don't feel like you have to use all the same things I do!

Tip: Tuna salad uses such small quantities of carrots, onions, and celery that it's almost never a good idea to buy them for the express purpose of making it. But carrots, onions, and celery are what's known as mirepoix, the basis of a lot of French cooking. Deli tuna salad is the perfect thing to make when you've got a spare celery stalk from making a soup broth, the tail end of an onion that's too big to throw away but too small for an entree, and a few baby carrots left at the bottom of a bag. I even like to chop them up right then and there and set them aside in a container so they're ready to make tuna when I am.

Start by hard boiling an egg. I use J. Kenji Lopez-Alt's steaming method which I find produces eggs that are easy to peel. If you have a method you like better, that's totally fine.

To hard boil an egg: Fill a small pot with about an inch of water and bring it to a boil. Place the egg in the water, cover, and reduce the temperature to maintain a rolling boil for 11 minutes. When the timer goes off, pour the water out and fill the pot with cool water. Let the egg sit for about 5 minutes, then peel it under cold running water.

To chop a hard boiled egg: Use an egg slicer to cut the egg horizontally. Then carefully pick up the egg so the slices stay together, turn it 90 degrees, and slice in the opposite direction. The second set of cuts will be perpendicular to the first set, chopping the egg into nice small cubes.

Finally, add any herbs and spices — don't forget salt and pepper! — and then transfer the tuna salad to a deli container and stick it in the fridge.

In the photos here I've mixed the tuna salad in a bowl because it's easier for you to see. But when I'm making this tuna salad for myself, I mix everything right in one of my fave deli-style containers (a 16 oz soup container is the perfect size).

Ideally you want to let the tuna salad chill in the fridge overnight, but even just a few hours will give it time to start melding all those flavors together. This is how you get that deli flavor, and there's not really any way to rush this step.

What can I use instead of mayo in tuna salad?

Vegan mayo, sour cream, greek yogurt, or Miracle Whip. I can't speak for how those will change the taste or if you need to change the quantity if you're subbing out the mayo, so my recommendation is to add whatever you use instead in smaller amounts and adjust to taste as needed.

Can tuna salad be left out overnight?

Unopened canned tuna can be safely stored at room temperature, but once opened it needs to be refrigerated. And while this tuna recipe does require an overnight resting period, you should not leave tuna salad out overnight at room temperature. Put it in the fridge immediately.

How long will tuna salad stay good in the fridge?

This tuna salad will stay good for up to a week in the fridge in a container with an airtight lid.

Can I make this tuna salad without celery?

Of course you can!

If I use the tuna pouches do I still need to drain them?

Nope! No draining required if you're using the tuna pouches or packets. 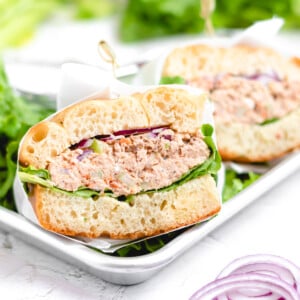 Click here to add your own private notes. Only you can see these.
Tried this recipe?Leave a comment and let me how it was!
« building pita pockets the right way
ask the practical kitchen: I'm a beginner baker and want to make bread, where should I start? » 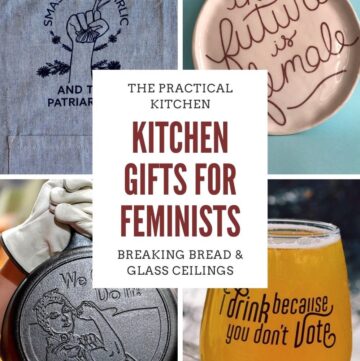 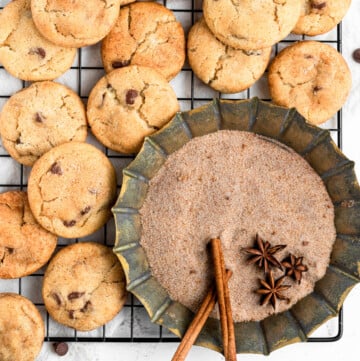