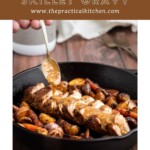 When you want to do a lot with very little, making pork tenderloin in a cast iron skillet is the way to go. It's an affordable cut of meat, and when you cook it right, it comes out beautifully seared on the outside with a tender, juicy center.

If you're wondering how to cook pork tenderloin on the stovetop without it drying out — this is the perfect recipe for you! You will need to finish cooking this skillet pork tenderloin in the oven, but it's so easy and hands off, I just know you're going to love it.

We almost always have a pork tenderloin in our freezer for easy, last-minute dinners because they're such a great blank canvas for whatever spices or herbs you have on hand. And since there's plenty of room to spare when you cook pork tenderloin in a skillet, we save time by cooking our vegetables right along with it.

So this isn't just a recipe for pork tenderloin. This is cast iron skillet pork tenderloin and potatoes and carrots and gravy — a whole meal in one pan!

I learned to appreciate pork tenderloin later in life — my family didn't keep kosher growing up, but pork just isn't something many Jewish families cook with a lot. Now it's one of my favorite cuts of meat to work with, because there's just so much you can do with it and it's really easy to make.

I know pork has a reputation for ending up dry, but if you use a meat thermometer and give it time to rest before slicing, you'll end up with a perfectly cooked piece of meat. And that's exactly what we're going to do here.

I purposely kept this recipe really simple. Exceedingly simple. I used as few ingredients as possible to really focus on the technique. You can definitely take this recipe and use it with your favorite seasoning blends.

For me, that meant reaching for my ride-or-die pantry staples: paprika and garlic powder. Everything — pork, potatoes, and carrots — cooks in the same cast iron skillet on the stove to get a nice sear. Then it goes in the oven to finish cooking with a more gentle heat.

It's hard to beat a recipe that takes simple and minimal ingredients and one skillet to make an entree, side, and a sauce.

Here are the ingredients you'll need to make this paprika pork tenderloin with potatoes and carrots, as well as for making the super easy cast iron skillet gravy for serving the pork tenderloin medallions! See recipe card for quantities.

🍳 Instructions - How to Cook Pork Tenderloin in a Cast Iron

Start by preheating your oven to 425F with a rack in the middle so it's ready to go.

Mix the paprika, garlic powder, salt, and pepper together in a large bowl. Remove the silver skin from the pork tenderloin, pat it dry, and then place it in the bowl. Rub the seasoning blend all over the tenderloin until it is well coated.

Then heat the cast iron skillet over medium to medium-high heat. Add the oil and swirl to coat the pan.

Sear the pork tenderloin on each side for about 2 minutes. At first the tenderloin might be too long or you may need to need to curve it a bit to fit, but it will shrink as it cooks. Straighten it out each time you flip it so it doesn't get stuck!

While the pork tenderloin is searing, add the potatoes and carrots to the bowl the pork was in. Toss them around to pick up any remaining paprika and garlic seasoning (or sprinkle them with more of each in the bowl and toss to coat).

Once the pork tenderloin has been seared on all sides, add the potatoes and carrots. You don't have to be fussy about this, but I usually try to flip the potatoes so they each have at least one cut side facing down.

Transfer the whole skillet — the pork tenderloin and the potatoes and the carrots — into the preheated 425F oven.

After about 10 minutes, check the internal temperature of the tenderloin and the potatoes for doneness.

While the pork rests, it's time to make the gravy!

To make the gravy for these cast iron pork tenderloin medallions, we're going to use the same cast iron skillet we cooked the pork in. By using the pan drippings from the pork, all the flavors from will carry right through into the gravy.

Place the cast iron over a low-medium heat and add the shallots and garlic. Cook them just until softened.

Then add the flour. The flour will soak up all the oil in the pan as you stir it in. Things will get very clumpy, the pan will look dry. Don't panic! This is normal. Keep stirring everything around to toast the flour.

When the flour is a toasty golden brown color, whisk in the chicken stock (and rosemary, if you're using it). Bring the mixture to a boil to burst the starch molecules, then reduce to a simmer. Continue whisking until the gravy is thick enough to coat the back of a spoon. Season with salt and pepper to taste.

To serve, slice the pork tenderloin into medallions about 1 inch thick. Divide between plates with carrots and potatoes on the side. Top with the skillet gravy or serve the gravy on the side.

This cast iron skillet pork tenderloin and potatoes recipe is super versatile and can be made with whatever spices you have in your pantry. You can also use this technique with wet marinades instead of dry rubs! Here's some other seasonings that are great with pork medallions:

Is pork tenderloin the same thing as pork loin?

Why is my pork tenderloin tough?

If your pork tenderloin is tough, this likely means you overcooked it past 145F. Make sure you're using a good instant read thermometer, and pull the pork out of the oven once it hits 140F. It will continue cooking as it rests.

Why should you sear pork tenderloin before baking?

Searing the pork tenderloin on all sides before transferring it to the oven starts the cooking process to speed things up in the oven. It also gives the outside of the tenderloin a really nice crust and browning.

How do you cut pork tenderloin into medallions?

After the cooked pork tenderloin has rested for 8-10 minutes, use a sharp knife to cut it into 1-2" inch slices. You can do this straight across or cut them on a slight diagonal to get oval shaped medallions.

I don't have a cast iron skillet. What can I use instead?

What size cast iron skillet should I use for pork tenderloin?

A 10 inch or 12 inch cast iron skillet is perfect for cooking a pork tenderloin. Anything smaller and you'll have trouble fitting the whole tenderloin without it curling up. 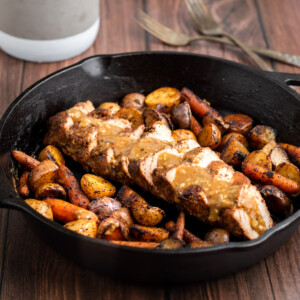 Rebecca Eisenberg
This paprika pork tenderloin uses ingredients you probably already have in your pantry and cooks all in one cast iron skillet for easy cleanup. Make sure you remove the silverskin from the pork before seasoning, and give it time to rest before slicing.
5 from 2 votes
Print Recipe Pin Recipe Save Saved! Email
Prep Time 15 mins
Cook Time 30 mins
Pan Sauce 5 mins
Total Time 50 mins
Course Main Course
Cuisine American
Servings 4 servings

Click here to add your own private notes. Only you can see these.
Tried this recipe?Leave a comment and let me how it was!
Main DishesUnder 30 Minutes
« Simple Tomato Curry Chicken
Really Good Turkey Burgers » 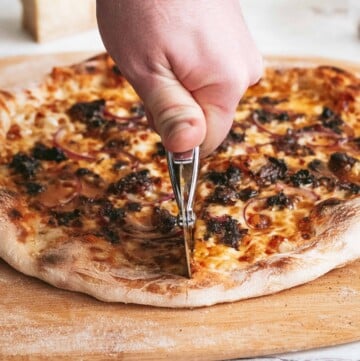 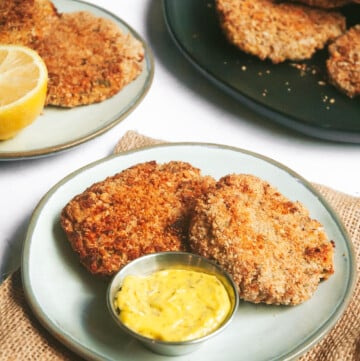 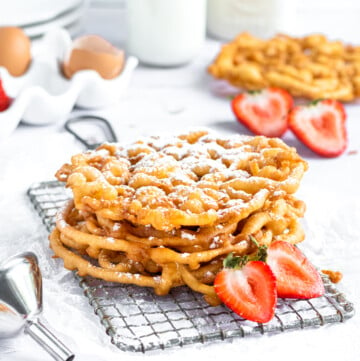