This post is for anyone who wants to learn how to maintain a smaller amount of sourdough starter that can easily be grown into a larger amount for baking.

When it comes to feeding your sourdough starter, there's no one way to do it right. There's only the way that works for you. Of course, there are ways to do it wrong, but that's not what this post is about.

As long as you're using filtered (non-chlorinated) water, occasionally cleaning the container you keep it in, storing it in the fridge, and preventing it from drying out, your starter — big or small — will be fine even if you go a month or two between feedings.

As I've written about before, for a long time I had the same, consistent sourdough feeding routine: 4 ounces of starter with 4 ounces of filtered water and 4 ounces of flour. I fed it every couple of weeks, and a few days in a row before I planned to bake with it. Always the same 4 oz:4 oz:4 oz ratio (a 1:1:1 ratio, for you math nerds out there).

The instructions I got with the starter said to feed it that way, so that's what I did. I didn't want to risk killing my second starter, so I didn't deviate from the system. And it worked pretty well for a while!

Few recipes, even discard recipes, call for anywhere near 12 ounces of starter. So when the pandemic hit and flour was harder to come by, I began looking for ways to scale back the amount of starter I was maintaining.

Like everyone else in the world, I learned a lot about sourdough in the early days of quarantine. I read the Tartine bread book, I read Flour Water Salt Yeast, and I read hundreds of posts in various sourdough baking groups on Facebook.

The single most important thing I learned was how to make sourdough using levain. This is the method used to make the standard country loaf from the Tartine bread book. I had baked sourdough with levain before using this recipe from The Kitchn (which is a modified version of a Tartine loaf), but I had just been following the steps. I didn't fully understand what levain was.

Fair warning: I'm going to massively simplify it here, just enough to explain what you need to know to maintain a smaller starter.

To really understand levain you should read the Tartine bread book (or this helpful guide on The Kitchn), which goes into much greater detail about the science and temperatures and different types of bacteria and wild yeast and lactic acids in your starter and how they work.

So here's the short version: When you bake sourdough with levain you take about 1 tablespoon of your mature (fed within the last 24 hours) sourdough starter (25g) and feed it a proportionately larger amount of flour and water — like 100 or 200g of each. It becomes a young, very active, sweeter smelling, more mellow flavored version of your sourdough starter.

If you don't bake with your levain when it's at its peak (which will depend on the temperature of the flour, water, and starter and the ambient temperature) it matures back into, well, mature sourdough starter.

When you bake with levain, you use almost all of it in your dough. Then you feed the remaining 1 tablespoon or so of remaining levain with equal parts flour and water and it becomes your new mature starter.

It's a much more sustainable sourdough process! And it totally opened my eyes to the unnecessary amount of flour I was using to maintain a massive 12 ounces of starter.

Why feed it a full cup of flour at every feeding when I only needed 1 tablespoon of mature starter to make levain for baking? Especially since I keep my starter in the fridge, and therefore need to feed it a few days in a row before baking with it.

The old way I fed my starter meant I'd often end up with an unwieldy amount of discard. And though I enjoy making sourdough discard scallion pancakes, understanding levain made it abundantly clear that my flour was better put to use feeding the levain when I wanted to bake than it was maintaining a large amount of unfed starter sitting in my fridge.

How to feed your sourdough starter

Feeding a small sourdough starter is exactly like feeding a larger starter. It's just smaller quantities.

If I'm feeding my starter just because it's been a while and I want to make sure it's refreshed, I'll weigh 1 tablespoon of starter (and discard or use the rest) and feed it using a 1:1:1 ratio. So if 1 tablespoon starter = 25 grams, I'll feed it 25 grams flour and 25 grams filtered water.

But that's just to maintain a small starter. What if you need more to bake with?

scaling your starter up for baking

I keep my starter in my fridge because I don't bake with it that often. Maybe once a month or so.

When I know I want to bake with it, I take it out of the fridge and pour off any hooch (black-ish liquid) that's collected on the top. Then, I measure out 1 tablespoon of starter by weight (25g), and feed it equal parts flour and water and let it sit at room temp for anywhere from two to 24 hours.

This first feeding is a small 1:1:1 feeding just to wake it up from its fridge slumber. I'll discard most of it and feed it again before I bake with it, so I don't want to feed it any more flour than I need to yet.

The last feeding before I bake with it is when I feed it like I'm building a levain. I use just 1 tablespoon of my mature starter, but if 1 tablespoon starter = ~25 grams, I'll feed it 50 or even 100 grams (sometimes as much as 200 grams!) each of flour and water.

What matters is that the flour and water are equal to each other by weight, and that the amount of each is equal to or greater than the amount of starter. I use whole round numbers like 25g, 50g, and 100g just to keep things simple!

deciding how much flour and water to use

To bake, I'll measure out the 200 grams I need for the recipe. This will leave about 1 tablespoon of starter in my container, which I'll feed with equal amounts of flour and water. This becomes my new small starter, which I let feed at room temp for a few hours before sticking it back in the fridge until I'm ready to use it again.

A starter fed at a 1:1:1 ratio will have a more intense sour flavor than a starter fed at a 1:4:4 or 1:8:8 ratio. When the starter makes up a smaller portion of the fed starter, the flavor will be mellower overall. The greater the amount of new flour and new water are in proportion to the amount of starter, the more diluted the sour flavor will be.

If you want to maintain a small starter, but also want your fed starter to have an intensely sour flavor, do your first feeding as a small feeding, but then use ALL of your fed starter in your second feeding.

The next day, in preparation for baking, you'll feed your whole 75g starter with 75g water and 75g flour (also 1:1:1). This will give you approximately 225g starter. If you use 200 grams of that starter in your dough, you'll have 25 grams left which you can feed with 25g water and 25g flour. Boom. Your small starter is back.

What about the small starter discard? Because a smaller starter means smaller discard, I feel less guilty if I throw some out. But if I know I want to make something that calls for sourdough discard, I'll save my small amount of discard in a sourdough container in the fridge and just keep adding more discard to it with each feeding.

I feed my starter a few times in a row before baking with it anyway, so the combined discard from 2 or 3 feedings is usually enough to bake with.

It's totally fine to store that discard in the fridge for several days or even a week or two before baking with it, too. Just remember, the longer it's been since it was last fed the more sour and less active it will be.

In the photo above, the 16 oz deli container on the left is my mature starter. I took 1 tablespoon of starter from there, placed it in the container on the right (labeled: STARTER), and fed it equal parts flour and water. When it's done feeding, it will be about the same size as the starter on the left. It will be my new starter.

The starter on the left is now my discard starter. I can either throw it out, or I can stash it in the fridge and add more discard to it when I feed the new starter (on the right) ahead of of baking with it. 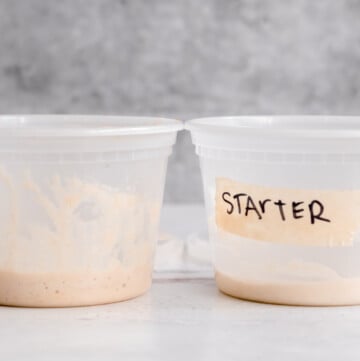 To scale your starter up for baking

Click here to add your own private notes. Only you can see these.
Tried this recipe?Leave a comment and let me how it was!
Cooking TipsSourdough
« Cherry Tomato and Sweet Pepper Snack Tart
When to Put Fresh Basil on Pizza » 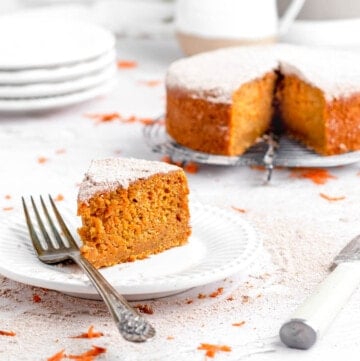 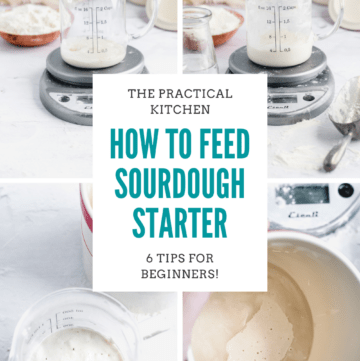 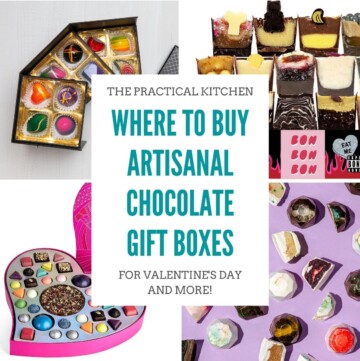