There are a lot of ways to use your discarded sourdough starter, but these sourdough discard scallion pancakes are so easy to make that you might find yourself feeding your starter more often just so you have a reason to eat them.

Traditional scallion pancakes have more in common with your average cinnamon roll than they do a pancake.

First, you have to make the dough. Then it needs to rise. Next, it gets rolled out into a big rectangle. Then you layer on the scallions and roll it up into a log, only, instead of slicing it into rounds like you would to make cinnamon rolls (see, I told you they were similar!) you spiral that log into a flat coil, roll it flat again, and then pan fry it.

And that's just for one pancake! I'm exhausted just writing about it.

These sourdough discard scallion pancakes, on the other hand, are more like their flapjack cousins. Even better, they're so super easy to make — if you have a sourdough starter.

Note: While these sourdough discard scallion pancakes are delicious, I cannot, in good conscious recommend getting a sourdough starter just so you can make them. That is way too much work.

As those of you dutifully maintaining your sourdough starters know, often when you feed them, you end up discarding a portion. And that kind of sucks!

I hate wasting food, so for the longest time I just never fed my starter unless I was going to use it — it would go a month or two between feedings. And yes, there's a whole world of sourdough discard recipes out there, but... they can still be a lot of work.

Sometimes I feed my starter while I'm making dinner, or in the morning before work, and I don't really want to get out a whole bunch of dishes or mess around with the mixer to make waffles or popovers or whatever.

Not only are these sourdough scallion pancakes a great way to put that discard starter to use, they're also a great way to use up a remaining nib of fresh ginger that you bought for one specific recipe or use the last few scallions that are starting to wilt.

how to make sourdough scallion pancakes

Sourdough starter is a leavening agent made from a fermented mixture of flour, water, and natural yeast and bacteria from the air. You can literally pour your starter right onto a hot skillet, sprinkle some sliced scallions and sesame seeds (for crunch!) on it, and it will become a pancake.

But... while you can certainly stop there if you want, I like to take an extra 60 seconds to dress my scallion pancakes up just a bit more.

I use sesame oil, water, and a splash of soy sauce to transform the thick starter into a pancake batter-like consistency, and add some additional flavors — ginger, sesame oil, a pinch of salt and pepper — to offset the concentrated sourness of it all.

adjust the recipe to suit the flavor of your sourdough starter

So think of the recipe below as guidelines, and definitely feel free to mess around with other toppings. One time I added some shredded leftover carnitas from taco night to my pancakes. Another time I added crumbled pieces of bacon. Sometimes I use fresh grated ginger instead of the powdered stuff if I have a piece leftover from another recipe that I don't want to waste.

And, fwiw, I eyeball pretty much everything while I'm making these. The whole point is to not make more dishes — don't bust out the measuring spoons unless you have to.

The recipe below, while it could technically be called "fried sourdough discard" is basically just a pancake. These sourdough discard scallion pancakes are soft and flexible with a tender crumb. They're not flatbreads, and they're not going to be airy and crispy. They might have slightly crisp edges depending on how much oil you use, but they're much more similar to a breakfast pancake in texture than a flatbread. 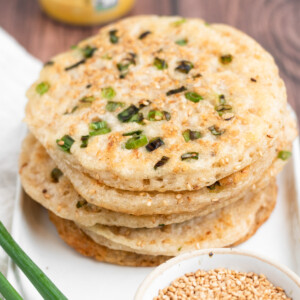 Click here to add your own private notes. Only you can see these.
Tried this recipe?Leave a comment and let me how it was!
BreakfastSnacksSourdoughUnder 30 Minutes
« Bread: My Favorite Book for Beginner Bread Makers
6 Tips for Feeding and Discarding Sourdough Starter » 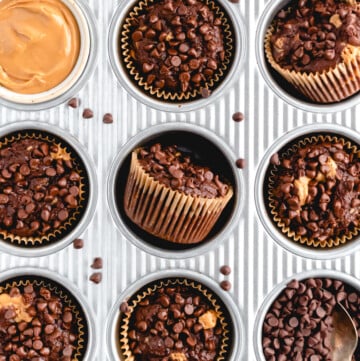 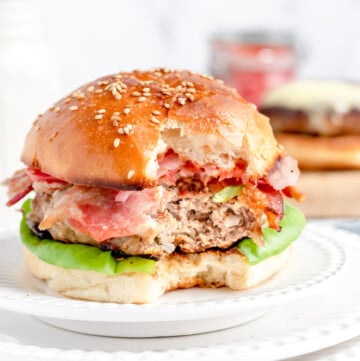 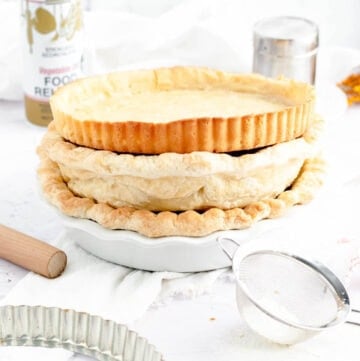