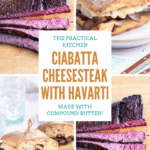 Inspired by our favorite diner in Baltimore, the Papermoon Cheesesteak is a quirky and nontraditional take on the classic Philly sandwich.

In the Hampden neighborhood of Baltimore, MD is a restaurant called the Papermoon Diner. When we visited Baltimore before moving there in 2014, it was the first place one of our friends brought us for brunch.

It's really not the kind of place you can ever forget.

Aesthetically, the Papermoon Diner is the epitome of camp. It's a colorful, eccentric, kitschy fever dream (featuring the wild mannequin artwork of David Briskie) that just happens to serve amazing food.

The Papermoon Diner's breakfast classics, like eggs Benedict and massive, overstuffed omelettes are always good but, for my money, the best item on the menu is the cheesesteak sandwich.

So now I'm gifting it to you.

UPDATE 9/8/21 — This post has been updated with all new photos, even more ingredient information, more robust tips, and a streamlined version of the recipe!

⭐ Why you should try this recipe

Served on a chewy, floury ciabatta roll with thick-sliced sandwich steak, caramelized onions, and buttery, melty, slightly sweet havarti cheese, the Papermoon cheesesteak might not be a traditional cheesesteak (don't @ me, Philly)... but it is one of the best interpretations of one you'll ever have the pleasure of eating.

If you're in search of a cheesesteak that epitomizes umami, this is it. Every single bite is packed with flavor, thanks to the air pockets and sturdy ciabatta crust that trap all the delicious juices and flavor inside.

🍽 How to make a Papermoon cheesesteak

I'm going to give you the benefit of doubt that you know how to assemble a sandwich, so I'm not going to spend too much time explaining that.

Once your meat is cooked and your onions caramelized, you melt the cheese on the open faced halves of ciabatta, stack your meat and veggies between them, and you're ready to eat.

If you can't find the pre-sliced stir fry or cheesesteak-style sliced steak at the grocery store, there is one part of the cheesesteak making process where you can actually go wrong though.

So let's take a moment to talk about what kind of steak to look for and how to slice it to get it sandwich-ready.

🔪 How to slice meat against the grain

The cut of meat I like to use for this is called "flap meat" or "flap steak." (It's usually pretty cheap, especially since you only need about a quarter-pound of steak per sandwich.) You can also use skirt steak, flank steak, etc.

For tender, juicy steak in your cheese steak, you need to slice the meat against the grain. When you take the steak out of the packaging and lay it out on your cutting board you'll notice lots of thin white lines of fat and connective tissue running parallel to each other. That's called the grain of the steak.

Because this is such a thin cut of meat, you cook it before you slice it up for sandwiches. This makes it harder to accidentally overcook. Depending on the size of your pan, you may have to cut your flap steak in half before you cook it.

To cut the meat down to fit in your pan, slice with the grain of the steak. Think of the grain like a guide for cutting, running your knife blade down one of the lines. (This is the only time you'll cut the steak in that direction.)

Once the meat is cooked, let it rest for a few minutes (this helps it retain its juices) before slicing it against (aka across or through) the grain to cut it into thin strips ¼" to ½" wide. Instead of using the lines like a guide, you're slicing across them perpendicularly.

Why does this matter? If you were to cut with the grain you'd end up with chewy, tough pieces of steak that are hard to bite through and prone to slipping out of your sandwich with every bite.

Cutting against the grain makes the steak tender, chewy, and easy to eat.

⏲️ How to properly caramelize onions

Caramelizing onions, done right, is a lengthy process that can take up to 45 minutes or more. Every time I see a recipe that calls for them, I think of Tom Scocca's excellent Slate piece, in which he concludes, "In truth, the best time to caramelize onions is yesterday."

I've purposely written this recipe to have you start by getting your onions in a pan to begin caramelizing. That gives them the longest amount of time to brown and soften before you're ready to assemble your cheesesteaks.

Since the peppers need less cooking time, you'll add the peppers to the onions closer to the sandwich assembly stage instead of starting them at the same time as the onions.

🧀 Where to find Havarti cheese

Havarti cheese can often be found pre-packaged (I like Castello's Creamy Havarti) sliced or in brick form at the grocery store. But you can also save a lot of money by going straight to the deli counter and asking for exactly how many slices you need.

I do this all the time, especially when we're making cheeseburgers and only need like, 2-3 slices of American cheese. For these cheesesteaks, you probably only need 4-6 slices (depending on how cheesy you want your steaks to be).

So if you're hesitant to buy Havarti cheese because you're not sure what else to do with it and you don't want to waste it, hit up your grocery deli and ask for the exact number of slices you want.

I can't find havarti cheese. What else can I use?

Tilsit cheese is widely considered to be the best substitute for havarti, but if you can't find that I recommend Fontina or a mild gouda.

Can I make this less spicy?

It's really not a spicy sandwich once you remove the seeds and ribs from the poblano pepper, but if the poblanos worry you, you can use green bell peppers instead.

Can I make this more spicy?

Yes! Leave the ribs on the poblanos or use a hotter pepper variety like a jalapeño instead.

What other cuts of meat can I use?

Any thinly sliced cut of red meat will work here. Avoid ground beef or tough cuts like stew meat. But you could be super fancy and use a thinly sliced filet or strip steak if you wanted to! If you've got leftover steak and want to slice it thin to use here, you absolutely can.

Do I need to use a cast iron pan?

You do not. I think it works best for getting a nice sear on the steak, but you can use a stainless steel pan or even non-stick instead. If you're using stainless steel, just remember to pre-heat it before you add the oil so the steak doesn't stick.

Can I make any of this in advance?

You can make the pepper and onion mixture and cook and slice the steak up to 5 days in advance. Store in the fridge until ready to assemble. Because everything will be cold, I recommend assembling the sandwiches open-face and toasting them with the meat, peppers, and onions on the bottom half of the ciabatta to warm them up. 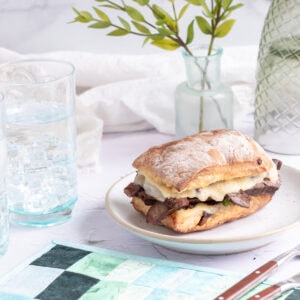 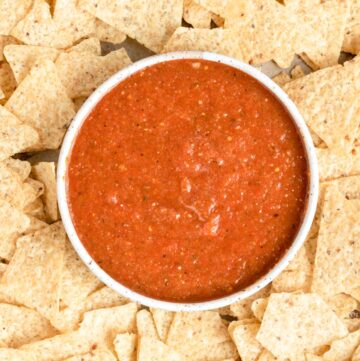 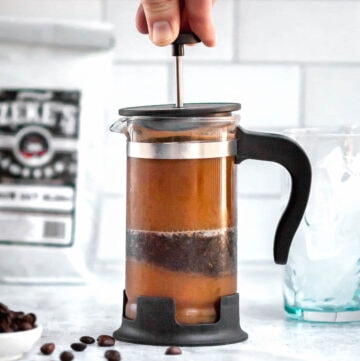