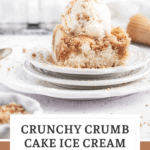 The same week I was testing my brioche crumb cake doughnuts recipe, my friend Emily loaned me her super fancy Breville ice cream maker and well, you can guess what happened. Yep, that's right. I ended up making crumb cake ice cream. It's so so so good served in a cone or on top of a slice of real crumb cake.

What is crumb cake ice cream? Glad you asked. It's a creme anglaise ice cream base infused with cinnamon and nutmeg, two classic crumb cake flavors, and then it has real crumb cake topping stirred right in for lots of crunchy textural goodness.

The crumb cake topping that gets mixed in is literally the exact same as the topping on my crumb cake brioche doughnuts. I've scaled it down to make just enough to use as a mix in, plus a little more for a crunchy topping. Because the crumbs get baked before they get mixed in the raw flour is heat-treated and safe to eat, and the crumbs hold up really nicely inside the ice cream.

how to make a creme anglaise ice cream base

Creme anglaise was one of my favorite things to make in pastry school. Wait— come back! Just because it's something I made in pastry school and has a fancy french name doesn't mean you can't make it too. Creme anglaise is just simple custard base that can be used to make ice cream, dessert sauces, and so much more. My favorite way to use it, of course, is as ice cream.

There's a 6-step process that basically every custard follows: scald, ribbon, temper; cook, strain, chill. Depending on what kind of custard you're making there are a lot of variations in each of those steps, but creme anglaise is one of the easiest ones to pull off at home.

"scalding" the milk and cream

The most important thing to know about creme anglaise is that you NEVER want to boil it.

The term "scalding" really only applies to raw or unpasteurized milk and cream and is a holdover from the days when that was the norm. Since you won't be using that kind of milk or cream here, all you really need to know is that scalding means heating the milk up to just below boiling. Remember: You NEVER want to boil creme anglaise.

Scalding is also when you steep any flavors you want in the ice cream base — in this case, we're using cinnamon and nutmeg — so that your ice cream is infused with a nice strong flavor.

How to tell when your milk is scalded: Tilt the pot forward when you see tiny bubbles forming around the edge of the surface of the milk; look at the bottom of the pot — if you see lots of active bubbles, your milk is scalded. Reduce the heat (or turn the heat off) and let the cinnamon continue steeping for 10 minutes while you prep the eggs and sugar. You might need to tilt the pot a few times before you see the bubbles on the bottom. That's okay!

ribboning the eggs and sugar

This is simple, it basically just means whisking the eggs and sugar together until slightly pale and frothy. The sugar will actually start to cook the egg a little bit, so don't add the eggs to the sugar until you're ready to start whisking. Once they're whisked together you can let them hang out for a bit while the milk finishes steeping, just give them a good whisking before you add the milk.

How to tell when your eggs and sugar have ribboned: If you pick the whisk up out of the bowl you should be able to draw a figure 8 with a "ribbon" of the mixture falling off the whisk. But honestly, don't worry about it if you can't don't see it fully ribboned — just give it a really good vigorous whisking by hand for about 1-2 minutes and you'll be fine.

tempering the milk and eggs

Tempering prevents the hot milk from turning the eggs into scrambled eggs. No one wants scrambled egg ice cream. Very slowly drizzle the hot milk into the ribboned egg and sugar mixture, whisking vigorously the whole time. Adding the milk slowly brings the temperature of the eggs up slowly, preventing them from scrambling. Once you've added about half the hot cream at a slow speed, you can add the rest more quickly — just keep whisking the whole time!

I like using a metal mixing bowl with a rubber bottom for this step so that I can pour with one hand and whisk with the other without the bowl sliding all over the place. If you don't have a bowl with a gripper bottom, just fold a kitchen towel under the bowl to anchor it in place.

what is "nappe" consistency

Once you temper the milk and eggs together you still need to cook the eggs to make them safe to eat and to make your ice cream base silky smooth and creamy. That means you'll pour the egg and cream mixture back into the pot you used to scald the cream and cook over a low-to-low-medium heat until it thickens up slightly, aka it reaches "nappe" consistency.

This can take a few minutes and you'll want to make sure you're stirring constantly so the egg doesn't cook on the bottom of the pan. Again, you do NOT want to boil creme anglaise.

You've reached nappe consistency when: The mixture evenly coats the back of a spoon. If you draw a line through it with your finger, it makes a clean line and the mixture doesn't shrink back or pull away from the gap.

It's easiest to see if you've reached nappe consistency using a wooden spoon — the creme anglaise sticks to wooden utensils better than silicone ones.

crumb cake in a pinch

I love serving up a scoop of crumb cake ice cream on top of a slice of crumb or coffee cake. It is just such a stellar combo. The cold melty ice cream with the crunchy crumbs and the tender cake soaking up all that cinnamon-y ice cream flavor is super yummy.

I didn't have time to do a whole coffee cake from scratch for the photos so I made an extra triple batch of the crumbs and used them on top of a — brace yourself — Duncan Hines boxed white cake mix. I know!!! You'd think I'd be ashamed to admit to using boxed cake mix, but I don't believe in shaming convenience food products and it's a great cake! Duncan Hines knows what they're doing.

I added some cinnamon and nutmeg and vanilla to the cake batter to give it that coffee cake flavor, but otherwise it's just the box mix topped with crumb cake topping.

Oh, and, you don't need to bake the crumbs before using them as cake topping — they'll bake along with the cake. 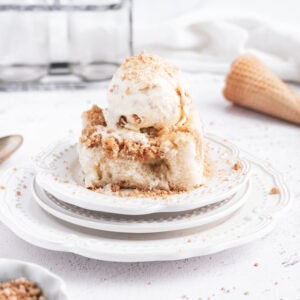 Click here to add your own private notes. Only you can see these.
Tried this recipe?Leave a comment and let me how it was!
Ice CreamCinnamon
« Do Bagels Need to be Refrigerated?
You Need Kitchen Towels You Don't Care About » 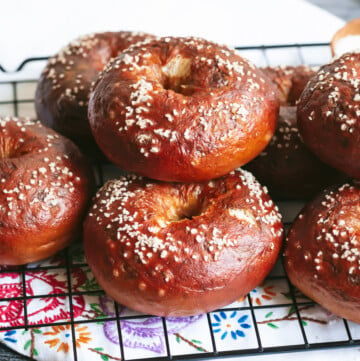 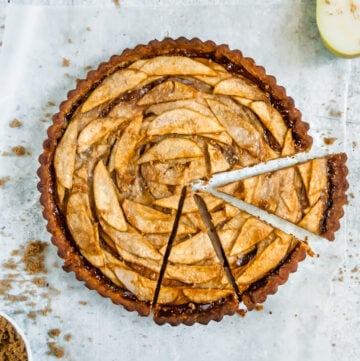 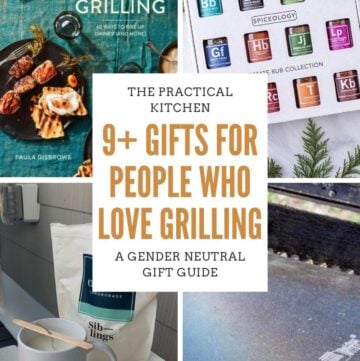