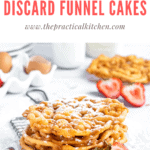 These fried sourdough discard funnel cakes are so much fun to make! They're crispy and golden brown but so light and fluffy on the inside with just a bit of tangy flavor from the sourdough.

Funnel cakes are my faaaaavorite food at carnivals and fairs. The swirly ropes of deep fried batter, the fact that you have to eat them quickly, can eat them on the go, they're great for sharing, the infinitely customizable toppings... they're just fun!

In researching this post, I was delighted to learn that the modern version of the funnel cake actually originated in my home state of Pennsylvania in the Pennsylvania-Dutch community.

I also love funnel cakes because they're just like, the ultimate practical festival food. The batter is simple and so easy to make in bulk, and they take less than 2 minutes to fry to golden brown perfection.

Funnel cakes are a brilliantly simple and economical food to make when you need to feed that many people and feed them quickly.

Making funnel cakes with sourdough discard actually makes them completely impractical in a carnival scenario — you'd need SO MUCH DISCARD to make that many funnel cakes.

But this is a small batch funnel cake recipe for you to make at home, and is a very practical way use your sourdough discard instead of throwing it away!

Fried sourdough discard funnel cakes are made from a batter that's really similar to pancake batter. No speciality ingredients here! You probably have almost everything you need to make them in your kitchen already.

Instructions - How to Make Funnel Cakes!

Developing the batter for these fried sourdough discard funnel cakes was simple — probably one of the easiest recipes I've worked on.

What really took some troubleshooting was figuring out the best way to actually fry these funnel cakes. The ropes of batter have a tendency to spread out and fill the whole surface of whatever pot you're using, which makes them hard to flip without splashing hot oil everywhere.

Like I said, this is a small batch funnel cakes recipe. How big you want to make your funnel cakes will change the size of your batch. You can make fewer larger ones, or many small ones.

My favorite way to serve my fried sourdough discard funnel cakes is with powdered sugar and fresh strawberries, but you can definitely get creative. Any combination of these toppings would be delish:

What do you like topping your funnel cakes with? Let me know in the comments!

Can I use non-dairy milk in my funnel cakes?

Can I make sourdough discard funnel cakes in an air fryer?

No, you cannot. An air fryer is basically a convection oven and it won't cook the outside of the batter fast enough. You'll end up with flat pancakes.

I don't have sourdough starter, can I still make these?

I'm allergic to eggs, what can I use instead?

My batter is too thick/thin, it's coming out of the funnel too slowly/too quickly. What can I do?

Is funnel cake a cake?

Nope. Funnel cake is a fried batter. If you baked it like a cake you'd end up with something closer to a breakfast pancake than a cake.

Can I use a squirt bottle to pour the funnel cake batter?

You want something with an opening at least ¼" wide. You also want to be able to get a fairly continuous rope of batter and let gravity do most of the work, so you don't want something you have to keep releasing and squeezing again. An empty ketchup bottle would work well, but something finer than that will be too thin. 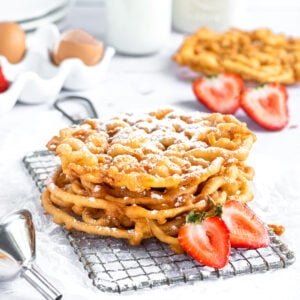 Rebecca Eisenberg
These fried sourdough discard funnel cakes are so much fun to make! They're crispy and golden brown but so light and fluffy on the inside with just a bit of tangy flavor from the sourdough starter.
No ratings yet
Print Recipe Pin Recipe Save Saved! Email
Prep Time 10 mins
Cook Time 2 mins
Resting time 30 mins
Total Time 42 mins
Course Dessert, Snack
Cuisine American
Servings 5 servings

Click here to add your own private notes. Only you can see these.
Tried this recipe?Leave a comment and let me how it was!
DessertsSnacksSourdough
« 8 things in my ADHD kitchen that just make sense
Orange Cardamom Ice Cream with Chocolate Chunks » 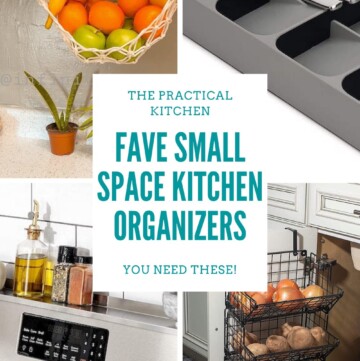