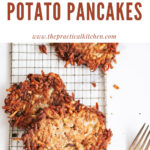 These potato pancakes have tender centers loaded with scallions and extra crispy edges that shatter under the side of a fork. They're perfect for Hanukkah and for brunch!

👩🏻‍🍳 What inspired these potato pancakes

Growing up, potato pancakes aka latkes (Yiddish for "pancakes") were a Hanukkah-only food in my house. But as an adult fully in control of my own dietary decisions, crispy fried potato pancakes one of my favorite breakfasts all year round.

My family doesn't have a latke recipe that was handed down through generations or anything, so I took it on my self to create my own personal ideal potato pancake.

There's a million and one recipes for potato pancakes out there, so I started by diving headfirst into researching what was already out there.

Here's just some of the recipes I dug into: Tori Avey's classic potato latkes, Bon Appetit's Adam and Maxine's famous latkes, Epicurious's potato latkes (and this Epicurious guide to making perfect latkes every time), Chabad's simple potato latkes, Forward's recipe for buckwheat potato pancakes, and, perhaps most crucially, The Kitchn's classic latkes which led me to my favorite technique of reserving the starchy water from the potatoes to use as a binder.

From those recipes I pulled together a combination of different techniques and ingredients and tested a bunch to see what I liked best. Then I added a whole lot of scallions, because I just really like scallions in my potato pancakes.

🥔 Why these are my ideal potato pancake

Everyone has their own preference when it comes to what a potato pancake "should" be.

Some people prefer a more uniform batter, closer to the texture of what you'd expect from chunky mashed potatoes. Other people prefer crispy, and lacy-edged potato pancakes with lots of visible shreds of potato.

What I like best is a crispy-edged scallion-stuffed potato pancake somewhere between thin and thick where the shredded potatoes tucked inside are almost (to borrow some pasta terminology here) al dente in texture. And that's exactly what these are.

So let's get on with it!

Start by lining a bowl with a clean flour sack cotton dish towel (basically, not terrycloth). Place a box grater inside the bowl and grate the potatoes and onion on the side with the large holes.

Alternate potato-onion-potato so the flavors start layering in the bowl as you're working. Be careful to protect your fingers. You might have little nubbins of potato or onion left at the end. That's fine. Don't hurt yourself trying to grate every last bit.

Once the potatoes and onions are grated, gather the edges of the towel together over the bowl. Twist the towel to wring out any liquid into the bowl.

There's a lot more in there than you think — really give it a good wringing. Press on different parts of the towel, and squeeze it thoroughly. This can take a minute or two.

That liquid is a combination of water and starches from the potatoes. Those starches will be crucial for helping to bind the potato pancakes together, so don't discard it.

Set the bowl of starchy liquid aside. The starches will settle on the bottom of the bowl as it sits, so make sure you put it somewhere it won't get bumped.

Meanwhile, combine the shredded potatoes and onions with the rest of the potato pancake ingredients.

Stir well to combine. Then stir a little bit more, just to be safe.

Once everything is mixed together, tilt the bowl of starchy liquid forward. You should see a layer of starch on the bottom of the bowl (see photo below, left).

If you don't see the layer of starch, let it sit for 10-20 minutes and check again.

Carefully pour the liquid off the top of the starch. Then add the potato mixture back into the bowl with the starch and stir well to incorporate the starch. That starch works as a binding agent and helps hold the pancakes together.

Now, you're ready to fry. Cover the potato mixture until the oil is ready. You may want to drain it once before you begin frying.

♨️ How to scoop and fry potato pancakes

🍴 How to get extra-extra crispy edges

To get a potato pancake with really crispy, almost bitter charred edges — the kind that shatter when you nudge them with your fork — make sure you don't skip these two steps:

🍽 How to serve potato pancakes

Traditionally latkes are served with either sour cream or applesauce. I always assumed the reason for both was simply because they taste good.

According to Chabad, the sour cream is actually symbolic of the meal Judith fed to Holofernes, the Greek general, before decapitating him in his sleep. Which makes it a little awkward that I tend to use plain Greek yogurt instead of sour cream with my potato pancakes.

The other, less traditional, way I like to eat my scallion potato pancakes is with sliced avocado or guacamole and a poached egg on top. It's a combo inspired by brunch trips to Bottega Louie in Los Angeles where my usual order was an avocado toast on a thick slice of brioche topped with pickled onions, chorizo, and a poached egg.

Can I make these in an air fryer?

I haven't tried, so I don't know. I'm sure you can reheat them in an air fryer, but I'm not sure how they would work being cooked that way. An air fryer is just a convection oven, it doesn't actually fry anything, so I don't recommend it. You'll basically end up with baked potato pancakes which are not as tasty or crispy as fried ones. That said, if you try it and it works, let me know in the comments!

Can I bake these potato pancakes?

Can I use Yukon gold potatoes or any other kind of potato?

I haven't tested these with other types of potatoes, so I'm not sure. A potato pancake made using a potato that's less starchy than a russet potato will be more likely to need help from some flour to bind together. 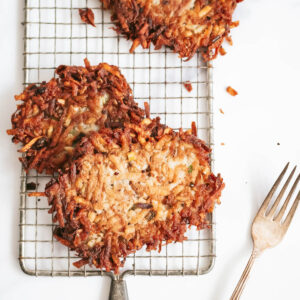 Rebecca Eisenberg
These potato pancakes have tender centers loaded with scallions and extra crispy edges that shatter under the side of a fork. They're perfect for Hanukkah and for brunch! I'm giving you the smallest possible batch here — enough to make 6-7 extra crispy scallion potato pancakes. Use the 2X or 3X button to scale this up for a party.
5 from 3 votes
Print Recipe Pin Recipe Save Saved! Email
Prep Time 30 mins
Cook Time 20 mins
Total Time 1 hr
Course Main Course
Cuisine German, Jewish
Servings 7 latkes

This post was originally published on August 17, 2020. It has been updated with new photos, even more detailed instructions, and a revised recipe. 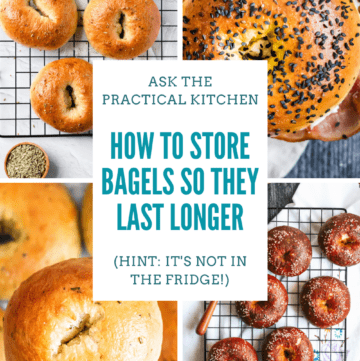 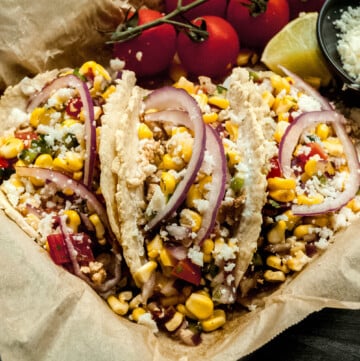 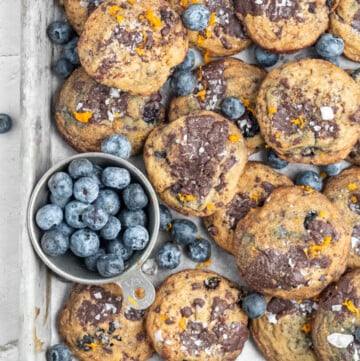